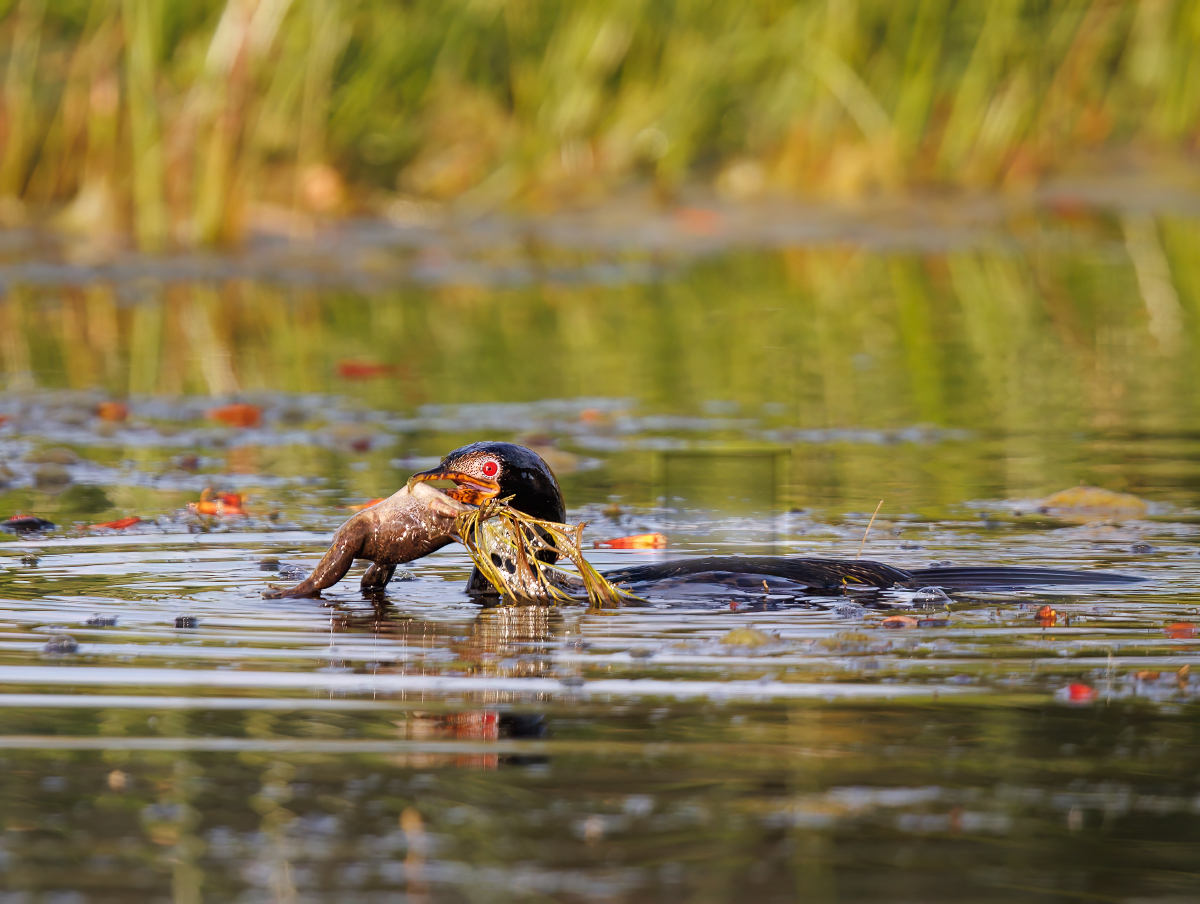 Whilst photographing a pair of Little Grebes in a small pond at Fancourt, George, South Africa (link to blog), I was treated to the spectacle of a Reed Cormorant catching a frog. It had been sitting on the bank quite close to me and I captured a number of images of it closely surveying the water in the pond. The pair of Little Grebes were quite concerned about it as they were busy feeding their newly-hatched two chicks. At times the male made a run on the water towards the Cormorant but it seemed unfussed.

I had fortunately just put a 2x extender on the 600mm lens that I had been using to photograph the male Little Grebe feeding one of the chicks when I noticed that the Cormorant was in the water on the far side of the pond. I needed all the focal length I had available. It also helped when I also captured some images of the female Grebe as she came off her nest to feed the other chick in the water at the far end of the pool.

The cormorant dived and emerged with a frog in its beak. (see the featured image at the beginning of the blog). Thereafter it thrashed about in the water and tried to swallow the frog. The following images were taken during that time. 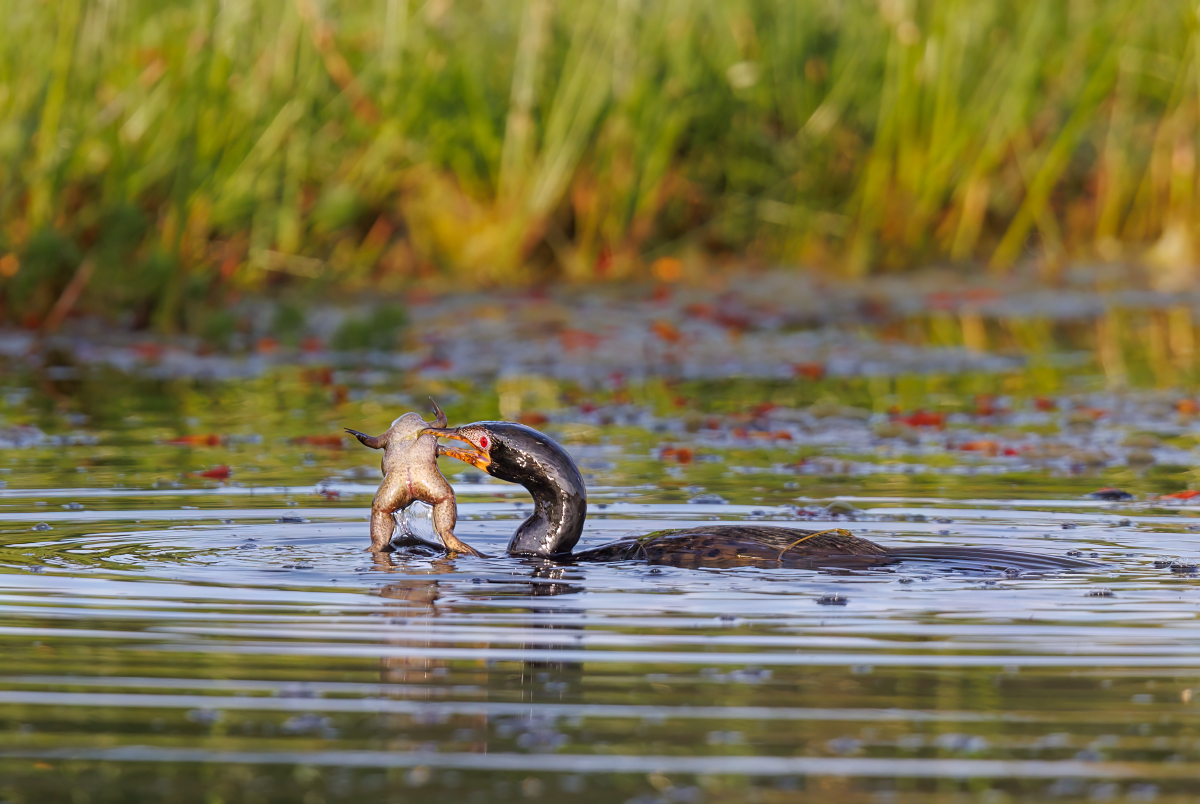 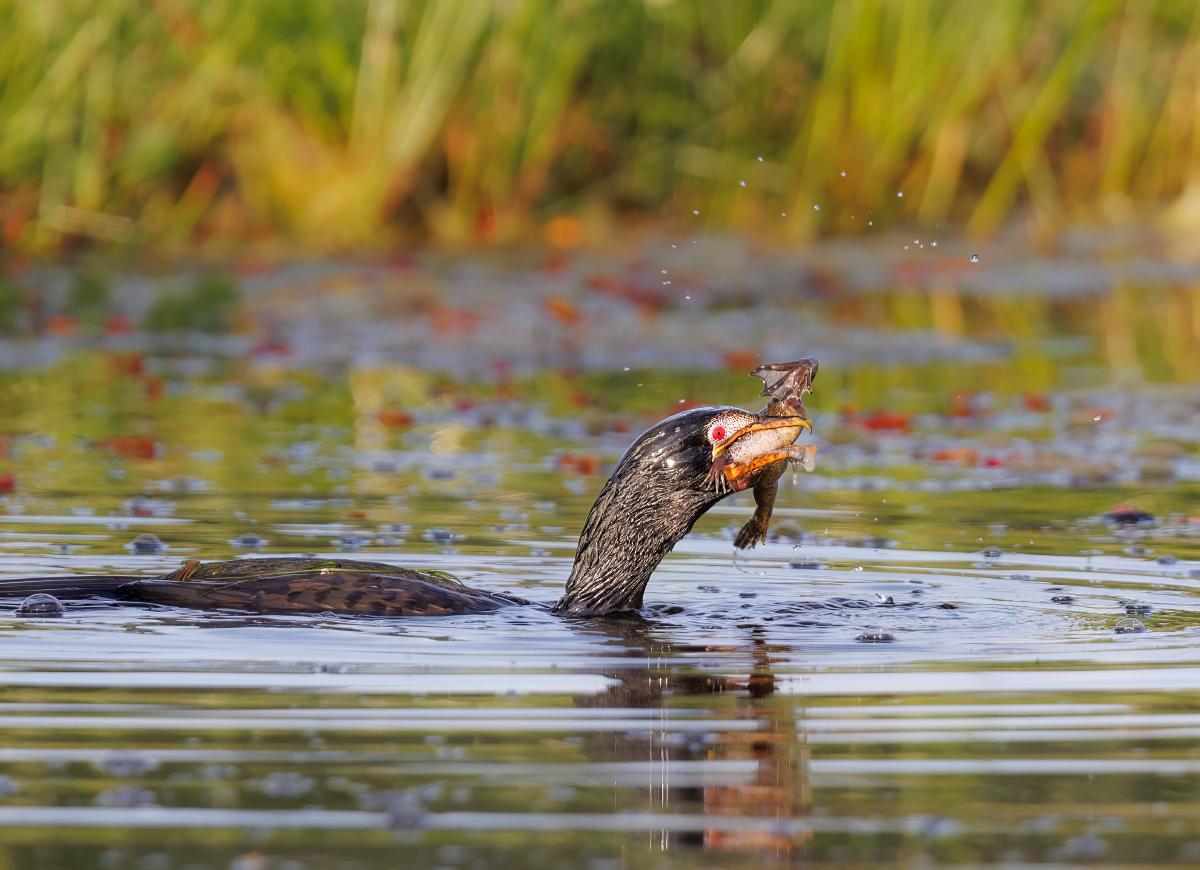 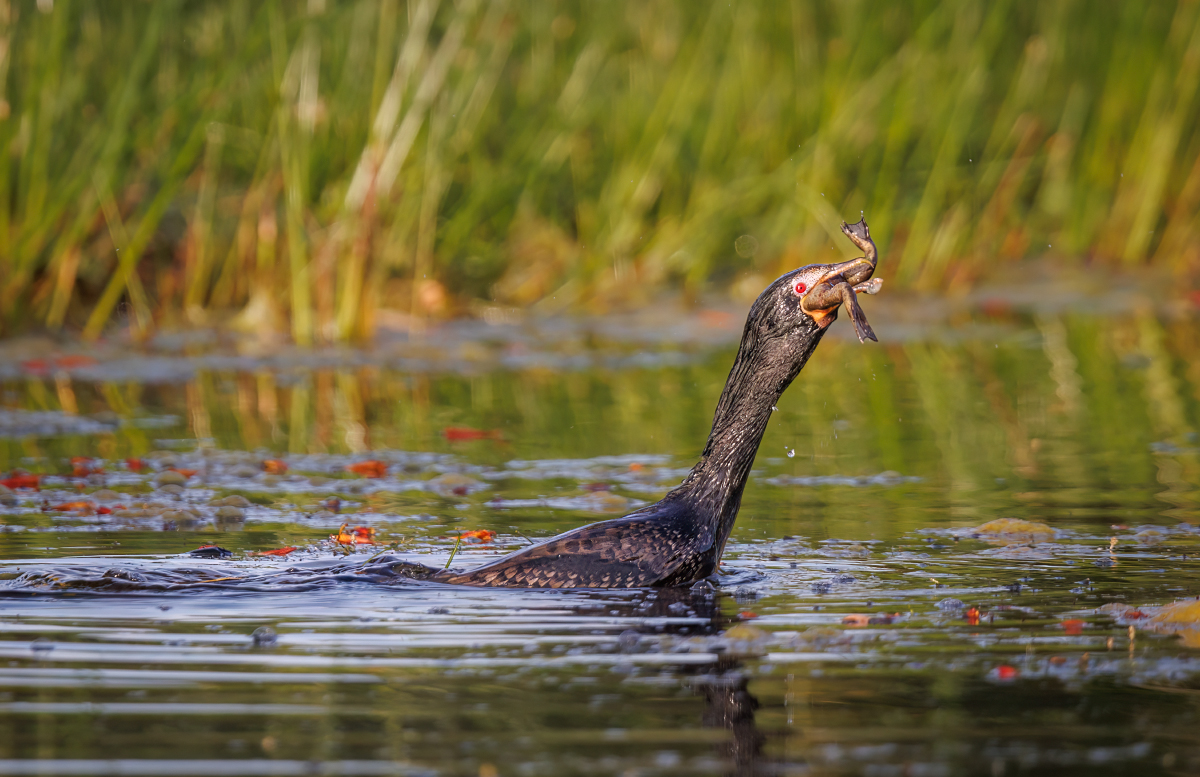 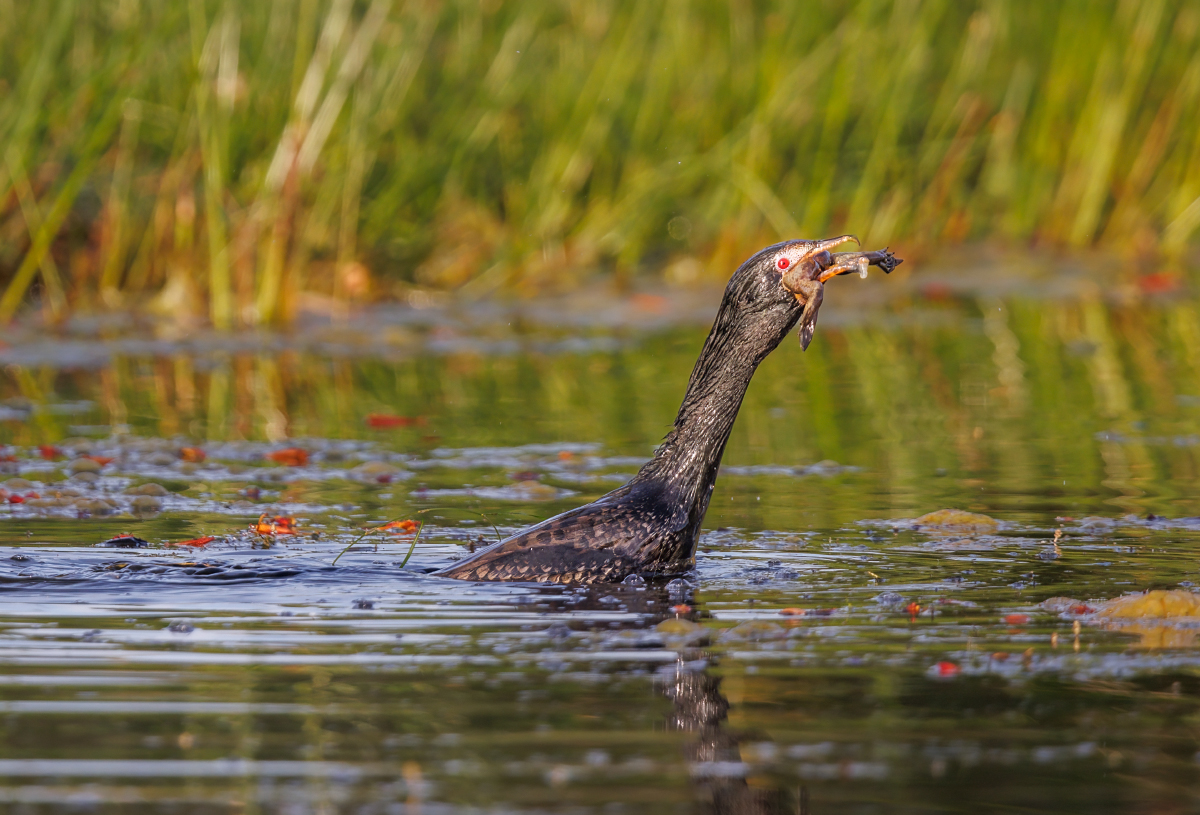 The Cormorant finally submerged and came up with only a small piece of the frog hanging on its beak. I presumed it had managed to swallow it whole. 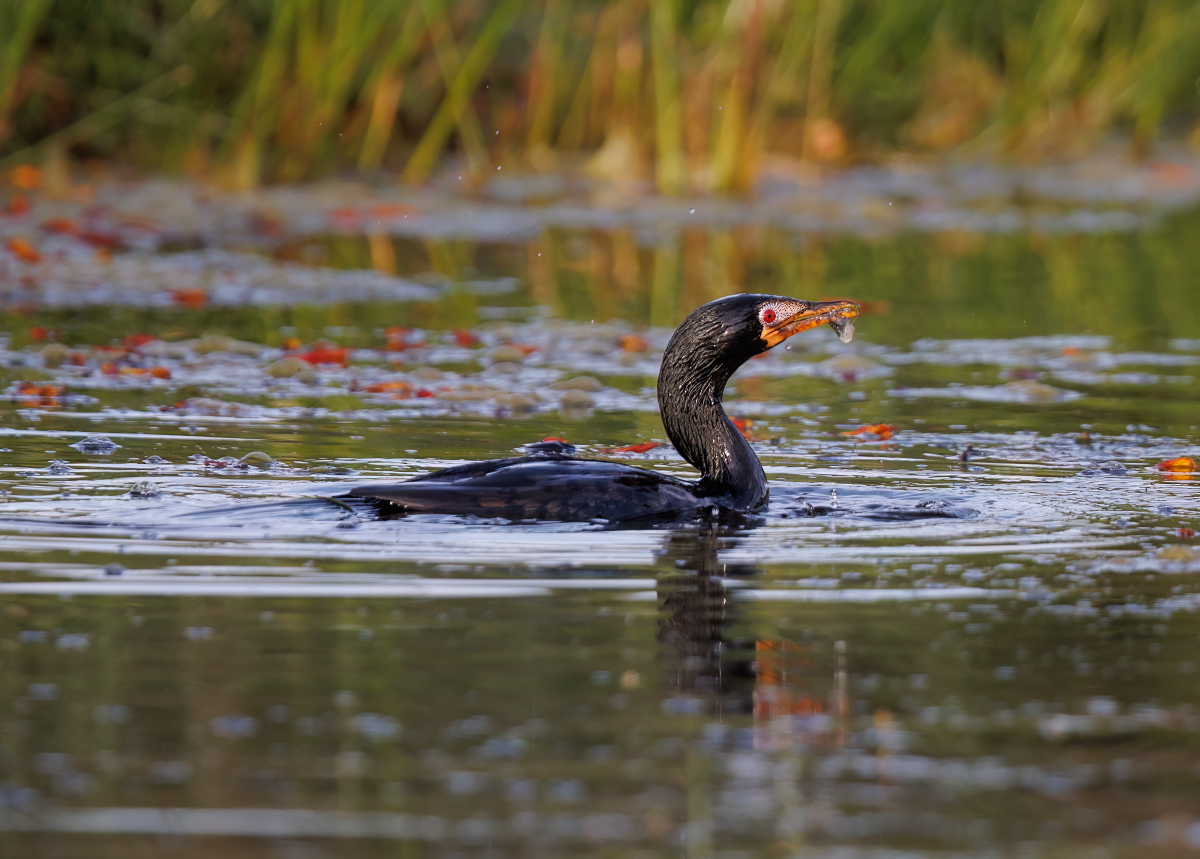 All the images of the Reed Cormorant were captured using a Canon R5 with a Canon EF 600mm f/4L IS II USM lens and a Canon EF 2x III Extender attached with an EF/RF adapter.  The adapters certainly made the rig pretty long in actual length.  the extender gave me an effective focal length of 1200mm.  The exposure settings were at an ISO of 1600, shutter speeds of 1/1600, 1/1250 or 1/1000 sec at f/8.  The image taken of the Cormorant on the bank was with the 1.4x extender.  This was at an ISO of 1250 and shutter speed of 1/1250 sec at f/5.6.  I had the rig mounted on a Gitzo 1548 tripod with an RRS  PG-02 LR pano-gimbal head.  The captures were difficult with the long focal length, and also, a 2x extender does degrade the image quality somewhat.  However, in spite of the extender and an adapter, the camera grabbed focus very well, especially as the head of the Cormorant is pretty small at that distance and it was bobbying up and down.

Turned out to be quite an interlude.