A great morning with Yellow-billed Ducks 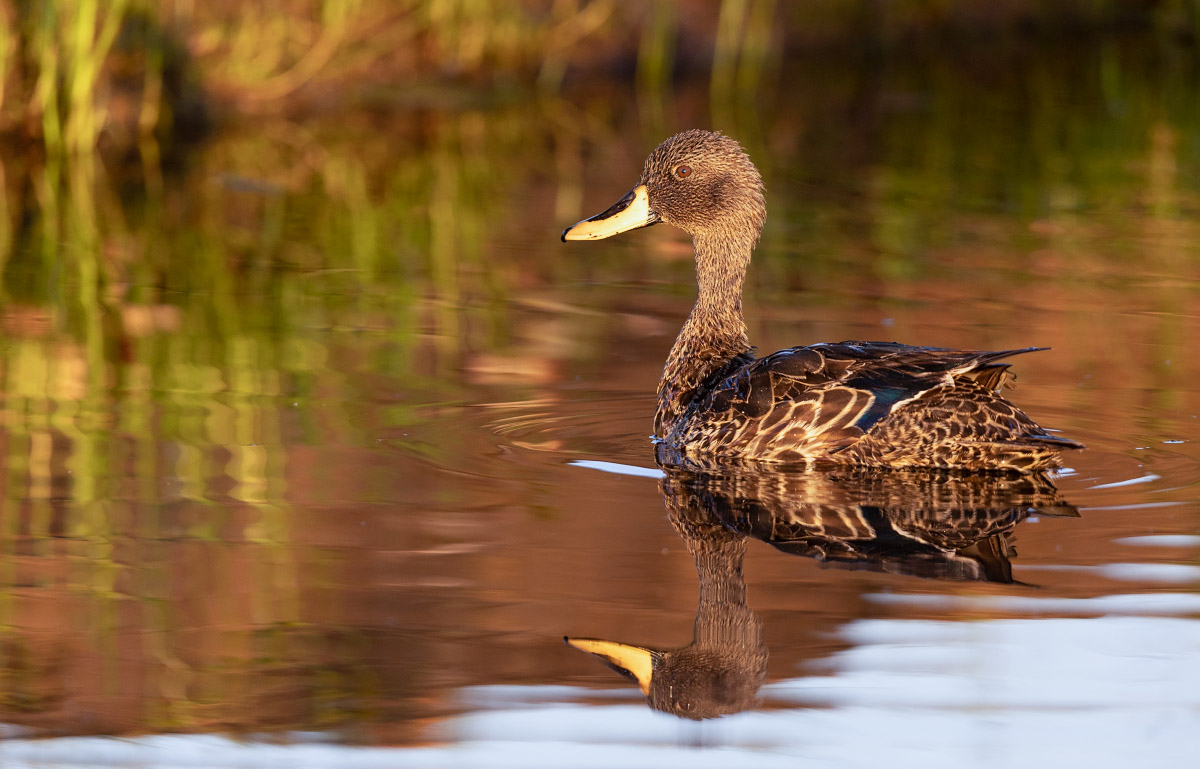 NOTE:  All images with same camera body and lens configuration. 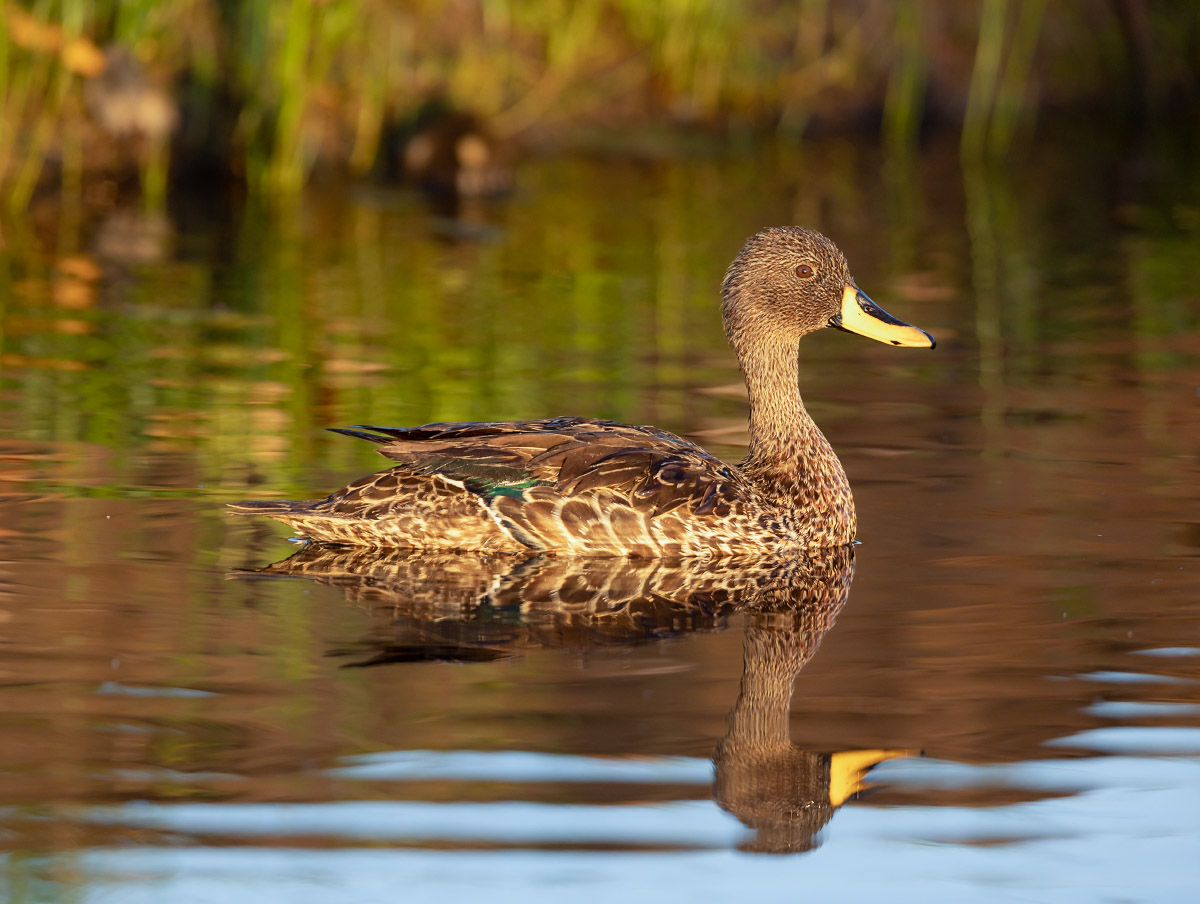 Some times you go out with good intentions and objectives and you find that there is either not much going on or conditions just don’t just seem right. Either the light is not good or the subjects that you are trying to photograph are not “co-operating” or a combination of factors.

This morning was not such a time. I went out well before sunrise to a small pond where I had previously noticed some activity from Little Grebes. I positioned myself to get the best light angle (straight behind me) when the sun would rise. I got perfectly good light before sunrise, at sunrise and for a while after sunrise – the best of both blue hour and golden hour. I captured a few images of the Little Grebes ( see “Image of the Week”) and then noticed a few Yellow-billed Ducks  with about 6 ducklings emerge from the grass surround. Generally they can be quite skittish and often move away or fly off. In this case they had the duckilings with them and they were on the far side of the pond. I also think that because I was there and got set up whilst it was still pretty dark they did not see me approach the pond.

I captured a number of images just as the sun was rising. It did make the images quite dramatically yellow and I did adjust the white balance slightly towards blue to counteract the intensity of the yellow light.

They are always interesting subjects to photograph as there plumage and bills are quite striking, although their head colouring is neutral brown and the eye does not make much of a contrast. The following few images show them swimming in the arly morning light and also there are two images with a duckling nearby. Reflections were good with with some disturbance from their wake as they were mostly paddling quickly across the water. With the R3, I was using HS Continuous+ Drive Mode with electronic shutter which gave me the ability to shoot at 30 frames per second. Subject tracking and Eye Detection was ON, so the autofocus system locked on the eye and you could concentrate on composition by moving the camera into the right position and follow the movement. 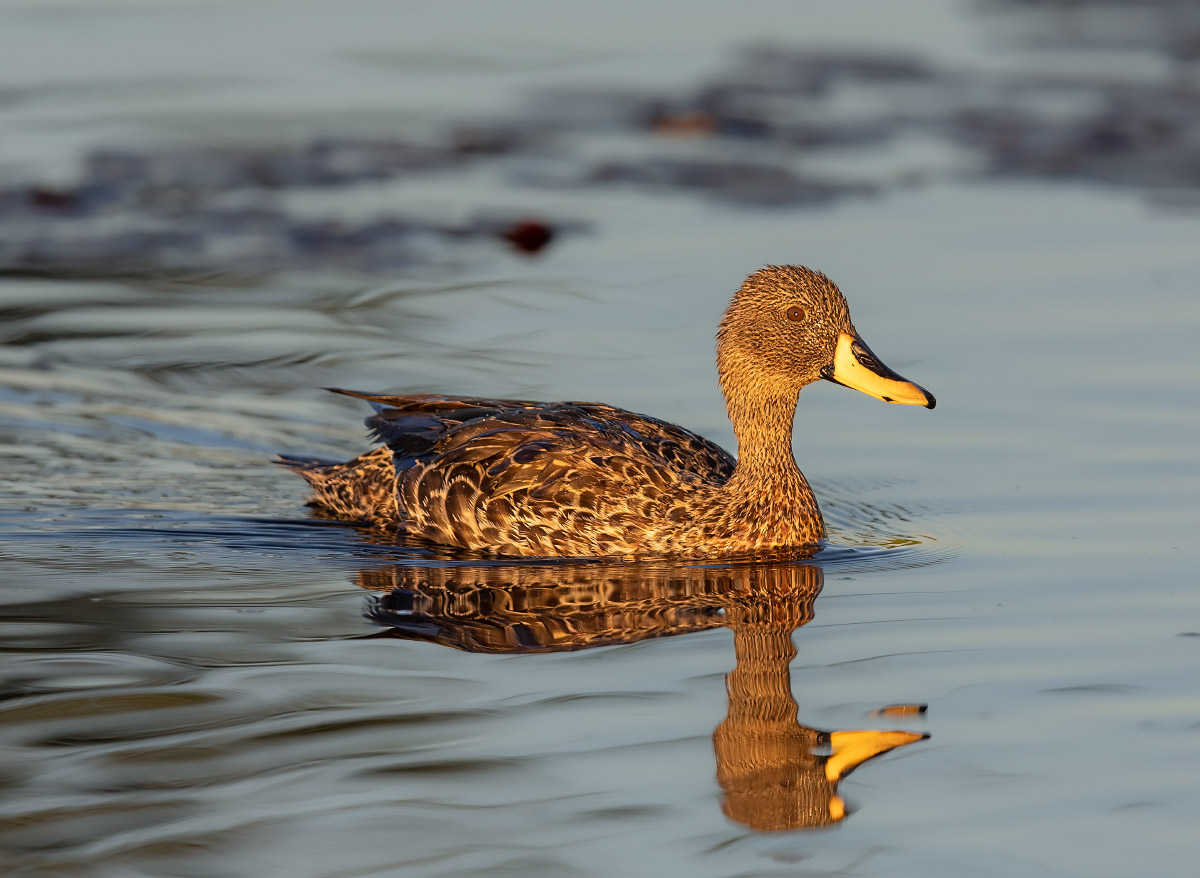 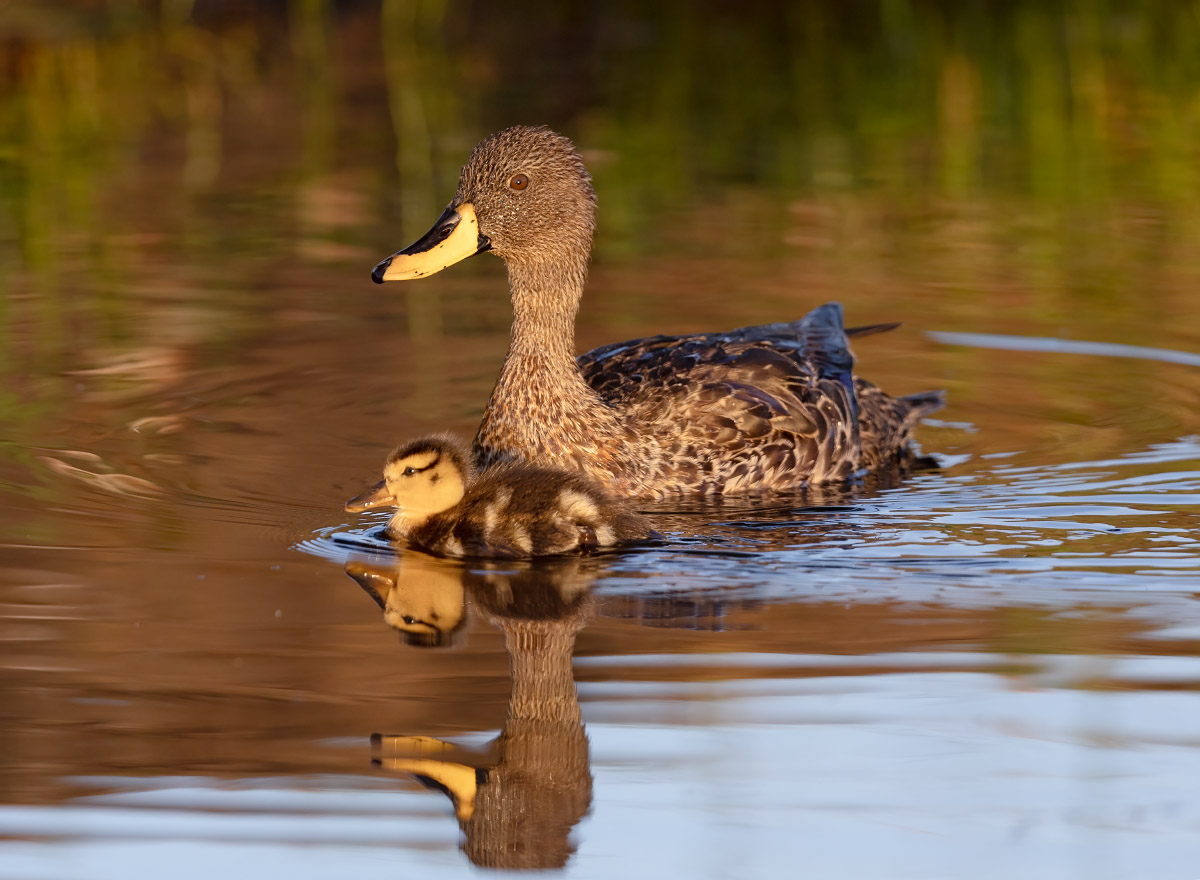 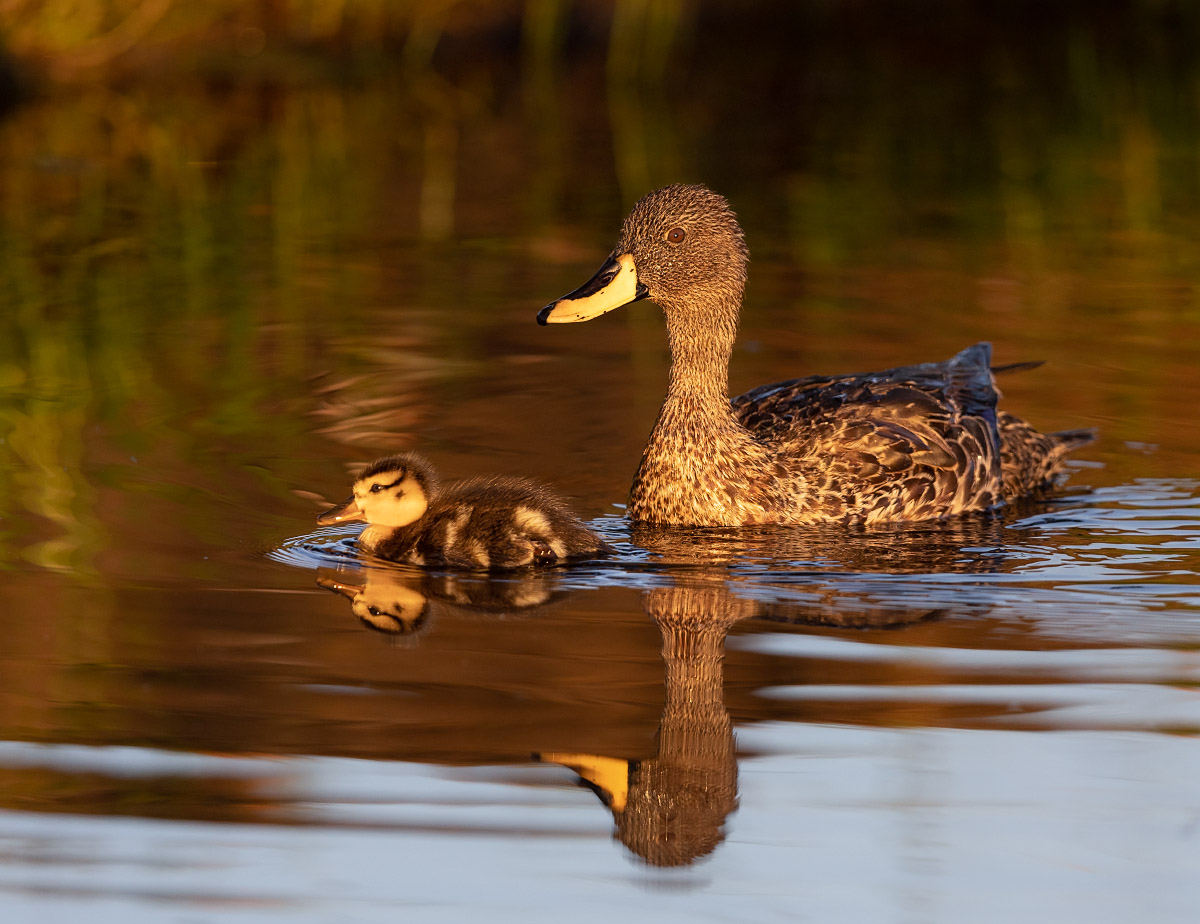 The one thing I found most interesting was the colour of the speculum. The speculum is a patch of often iridescent color on the secondary wing feathers of most duck species.  Much of the time it appeared green but with just subtle change to the light angle, it would appear blue.  This can be seen in the following three images. 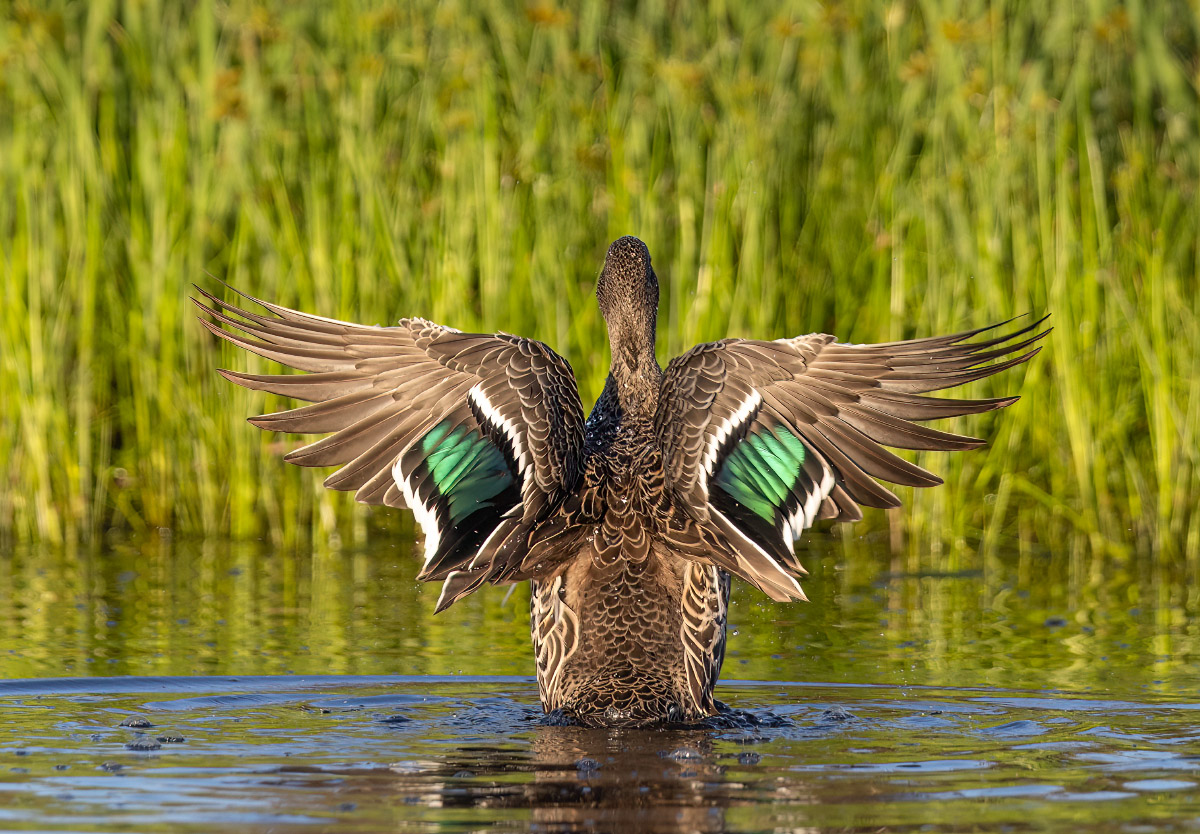 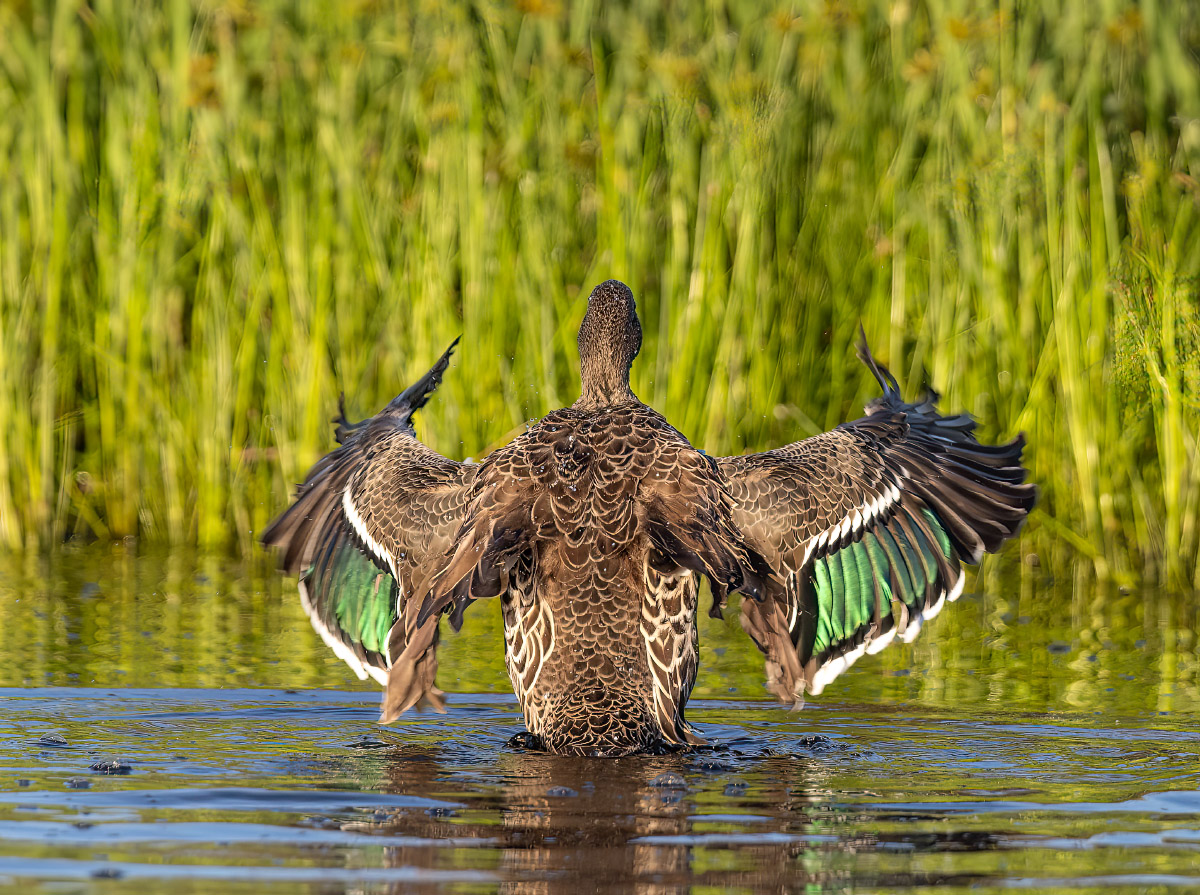 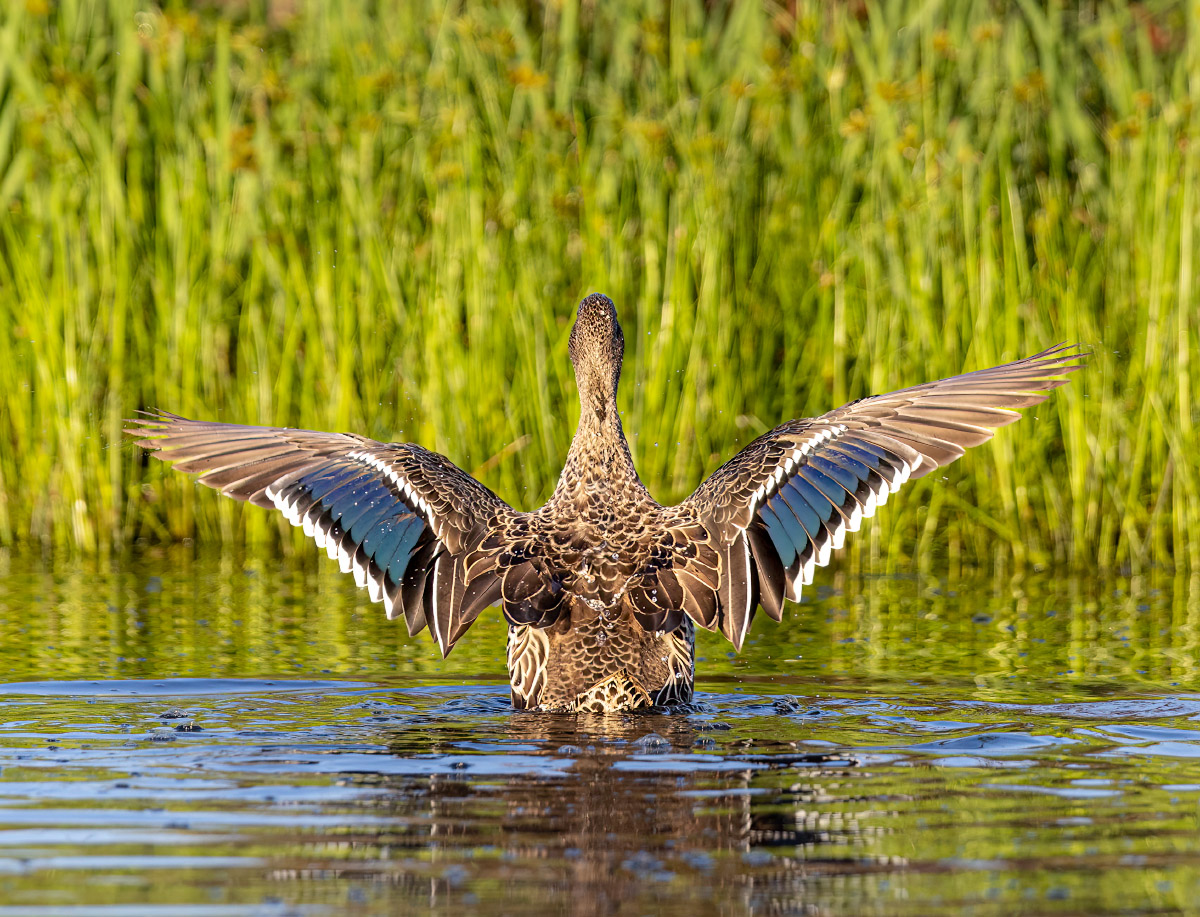 As mentioned earlier everything just worked out so well. The ducks “”performed” perfectly in the correct position with the correct light angle. They even up-ended to forage in the soft mud at the bottom of the pool as shown in the next image.  This also displayed its bright green speculum with a good rippled reflection. 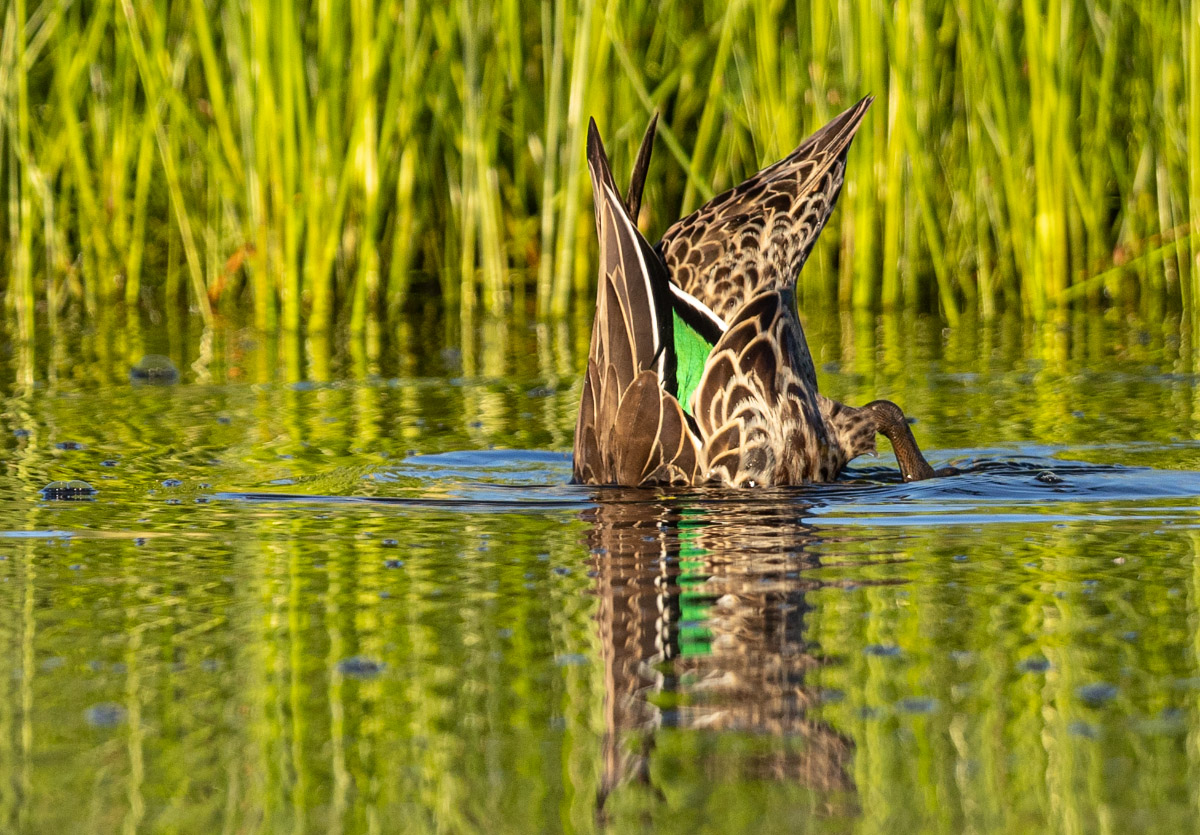 I was capturing a number of images of them diving under the water and then re-emerging. The R3’s fast frame rate made it possible to clearly demonstrate “like water off a duck’s back”. Duck feathers are coated with an oil that repels water, so no matter how many times they dive they always come up looking dry. You can clearly see the water just running off its back without leaving any trace of residual water.

As the light intensity increased, I captured a few more images. This time the water was bluer and brighter  and with a duck swimming slowly by, managed to get an excellent reflection and a small bow-wave. 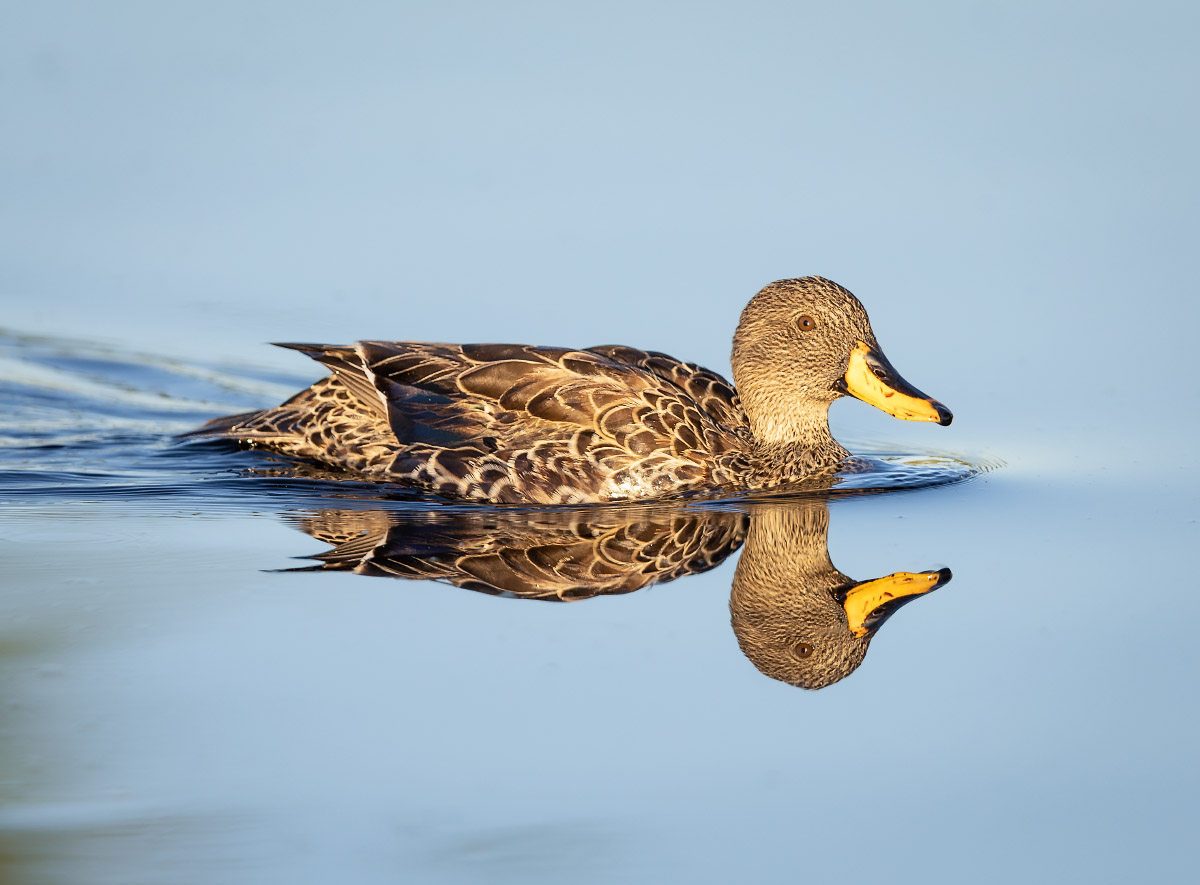 All-in-all a very rewarding morning capturing images of a rather ubiquitous bird. With luck and patience and a good camera set up, I could experience some of the interesting features and behaviour of these ducks. It also gave me more “practice time” with the R3.